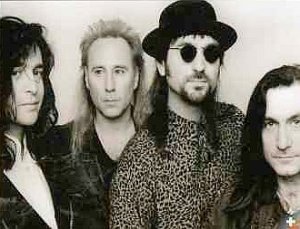 Short-lived, yet talented–that’s what we’re all about here at Rave and Roll.  Frozen Ghost, a Canadian 80s new wave band founded by Arnold Lanni (vocals, guitars, keyboards) and Wolf Hassel (bass, vocals), is no exception, with one slight twist.  Lanni and Hassel were also previously members of another short-lived and talented band called Sheriff. The 80s was a decade of band-hopping and “six degrees of separation,” and Frozen Ghost fits right in with that scenario.

To make matters more interesting, Frozen Ghost and Sheriff became rock chart competitors. Lanni, who owned the rights to Sheriff’s name, benefited from both bands’ royalties, so it turned out to be a successful business venture for him. Unfortunately, this somehow watered down the drive to make Frozen Ghost a musical force, and they ended up disbanding in 1993 after a long-awaited and mediocre album release.

Check out the band’s first two album releases: Frozen Ghost (1987) and Nice Place to Visit (1988) to experience the essence of what Lanni and Hassel had to offer before the musical waters were muddied. This is Canadian 80s at its finest, and another example of how regional music was criminally underrated and under-promoted here in the states.

Frozen Ghost ~ Round and Round ~ via YouTube user frozenghostsongs:

Frozen Ghost ~ Should I See ~ via YouTube user kurdtss:

Frozen Ghost ~ End of the Line ~ via YouTube user frozenghostsongs: