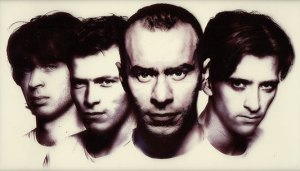 No, that’s not a typo in the title. A brilliantly talented collection of musicians, The The’s music is as unique as their name. Matt Johnson formed his band in 1979, made up of Johnson on vocals and guitar, Keith Laws on synths and backing tapes, and Peter Fenton-Jones on guitar and violin. The The finally picked up drummer Triash (Peter Ashworth) a year later to round out the line-up. 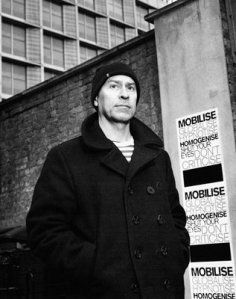 As with many super-talented bands, The The went through several personnel changes throughout the 80’s until it was just Matt Johnson all on his own. As The The, Johnson released the LPs “Soul Mining” and “Infected,” by picking up session musicians as needed for studio and live performances.

The The finally gained traction again in 1988, infused with the likes of ex-Smiths guitarist Johnny Marr, ex-Nick Lowe bassist James Eller, and ex-ABC drummer David Palmer. This line-up created and released the 1989 LP “Mind Bomb” which enjoyed great success on the UK charts.

The The has enjoyed a bit of a current popularity resurgence via the use of their song “This Is The Day” in advertising for M&Ms. Matt Johnson, with the help of a revolving cast of musicians, continued to record and play live performances through 2002. An LP called “The End Of The Day” was announced for release in 2007, but according to Wikipedia remains unreleased to this day. Let’s hope that collection sees the light of day. Matt Johnson was a true creative genius that drove the 80’s music scene to its limits. Today’s lagging, dull, and downright sleep-inducing music industry could use a solid artistic shot in the arm via Matt Johnson.

Purchase The The music here.