[Author’s edit: I see that the greedy suits at Warner Music Group are sticking it to the people that pay their elaborate salaries – they have taken down the “This Corrosion” video from YouTube. Someday the music companies will realize what a mistake they made when they no longer benefit from the free advertising that fan videos give them. Feh!]

As many of you know, I missed out on a lot of vital 80’s Post-punk and New Wave because during that time, life very much got in the way. It was more than a decade later, with the encouragement of several 80’s-philes, that I became totally enthralled and immersed in the best music that the 80’s had to offer.

The first time I recall hearing Sisters of Mercy was a few years ago. At that time, I was driving down US Highway One in Ft. Lauderdale, listening to Sirius-22 First Wave. This song came on that jolted me like an electric shock. Of course, no one back-announced the band/song name, and knowing that they probably wouldn’t, I had found a slip of paper and a pen in my purse and was madly scribbling lyrics as I drove. Later that evening, I Googled the lyrics, looked the results up on YouTube, and thus began my late-in-life love affair with Goth rock. The song was “This Corrosion,” and the band was Sisters of Mercy. 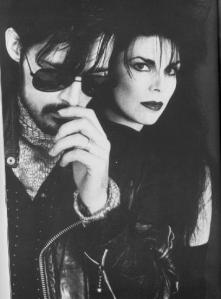 Sisters of Mercy began life in 1980 in Leeds, UK with Andrew Eldritch (vocals, keyboards, guitars), Gary Marx (guitars), and Doktor Avalanche drum machine. The band went through many line-ups, break-ups and assorted other drama throughout the decade. At one point, American bassist Patricia Morrison joined the group and added a strong visually appealing component to the band’s gothic theme with her sultry Mistress of the Dark, vampiric beauty. The band’s history reads like a soap opera and the details can be found here.

I confess that much like Barry Andrew’s (Shriekback) deep, throaty singing, Andrew Eldritch’s baritone sends tingles down my spine. It is not overdone. In fact, my biggest complaint with groups such as Type O Negative and 69 Eyes is that the deep lead voices are so overplayed that they become obvious caricatures, rather than plausible and vital parts of the music.

The bottom line is, Goth rock gained a strong foothold alongside the New Wave and Post-punk scenes of the 80’s. Fueled by early Post-punk talent such as Bauhaus, The Cure, and Sisters of Mercy, the genre grew its followers and enjoys great popularity even today. Sisters of Mercy was an important part of this cycle of birth and evolution, and remains a top influence for current Goth bands.

The following videos will give you a sense of the music, but try to keep an open mind. Forget the Michael Jackson-esque shades and the legions of undead. Forget the campy costumes and the very 80’s hair. Close your eyes, if need be, and just soak in the energy of pure, cutting edge Goth. Back then, no one did it better.