Before I embark down this slippery slope, I want to preface it with the caveat that this is a purely subjective list. Anytime anyone is asked to come up with favorite *anythings* the resulting list must be viewed from the perspective of my mother, whose favorite saying is, “Everybody’s taste is different. That’s what makes the world go ‘round.” Well put, Mom.

This was a difficult task, indeed. Ask any audiophile to pare their list of favorite music collections down to a mere 10, and the frustration level is sure to climb quickly. It’s tantamount to asking a long-distance runner which leg they’d like to sacrifice, or a hoarder which pet they’d like to keep. OK, maybe it’s not all that bad, but it’s certainly not a walk in the park.

After much consideration, I have narrowed my list of well-loved 80’s LPs to the very paltry ten listed below. This was a thought-provoking and extremely painful process. There are no explanations (excuses) as to why, only a profound sense of loss when imagining not being able to hear these treasures again. Yes, I know the Gary Numan selection missed the 80’s by a year….but it’s my blog and my rules. Feel free to chime in with your own list – I’m always happy to see what floats someone else’s boat.

Strange Advance – Worlds Away (1982)
“Worlds Away” via YouTube user mysweeteventhorizon:

Few 80’s musicians affect me in the way that Armoury Show does. Since I first heard “Castles in Spain” on the recommendation of my 80’s mentor several years ago, I was hooked. Sure, Richard Jobson was mercilessly criticized as being nothing more than a showman, acting out every nuance and feeling, emoting each emotionally charged lyric; but in my mind, and to my ear, it worked beautifully. Add to the mix the supreme and seasoned talents of John McGeoch (RIP), Russell Webb and John Doyle, and what you have is an unmatched combination that produced only one album of outstandingly lovely songs.

I wish I knew. I am fortunate to have the LP Waiting for the Floods in its entirety. No matter how often I play this collection, n

o matter how many times I put my favorite selection, the song identically named “Waiting for the Floods” on repeat, I am overcome. Jobson had a way with wringing the sentiment out of each song that shot daggers into even the coldest and unyielding of hearts. This was a huge leap from his previous punk roots as the angry lead singer of The Skids.

John McGeoch’s pedigree included Howard Devoto’s group Magazine and contributions to Siouxsie and the Banshees. He went on to further his career with Public Image Ltd. Webb followed Jobson from the Skids and left Armoury Show to pursue a solo career. Doyle, too, came from Magazine and post-Armoury Show, went on to rejoin Devoto and play with the Buzzcocks.

There are a few offerings from YouTube that will familiarize those of you who have never heard Armoury Show with their rich music. Unfortunately, the sole and home-made video on YouTube for “Waiting for the Floods” cuts off at the end. The song is a full 5:23 in duration, yet the video clocks in at only 4:23.

From the YouTube user RNregina ~ Waiting for the Floods:

From the YouTube user GallowayHills ~ We Can Be Brave Again: 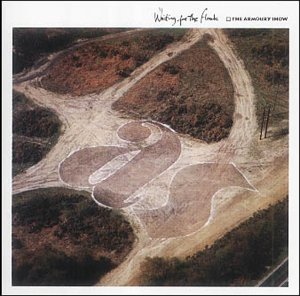 In terms of time, Armoury show, as a group, may have only been a short flash in the pan of a burgeoning era of post-punk and New Wave music. But, they left an indelible mark on the decade with a single album that remains as a testimonial to their talent. Why they were unable to take the world by storm will remain one of life’s ironic mysteries. Meanwhile, if you can find a copy of Waiting for the Floods, I urge you to buy it. Every 80’s music collection deserves to have this gem.