Please do not copy any portion of this article without the express written consent of the original author. Requests for permission may be left in the form of a comment on https://raveandroll.wordpress.com. 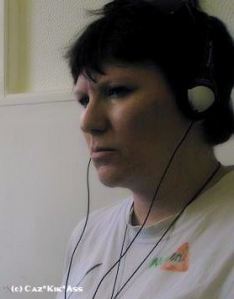 I met Caz a while ago through mutual friends on YouTube and MySpace where there is a large network of Numanoids. I have really had the pleasure of getting to know her better since we met up again on FaceBook.

Caz epitomizes what it means to be a loyal Numanoid. From her, I have learned that it’s OK to not be in love with everything that Numan does. What does matter is respect for the human being behind the stage personna, along with undying loyalty.

When asked how long she’s been a fan, I was not surprised to learn Caz has been Numanoid for over 31 years.

Caz answers the question, “What drew you to Gary Numan?” with, “Seeing him perform Are ‘Friends’ Electric? on the Old Grey Whistle Test programme.”

One word suffices when asked, “What does Numan’s music mean to you?” Caz responds automatically and plainly, “Everything. It’s there for me in good times and bad.”

Me: Can you name a favorite album?

Me: What about favorite songs—what would they be?
Caz: “Blue Eyes,” “Every Day I Die”…need I go on?

Me: Tell me about your most exciting Gary Numan moment.
Caz: Meeting him at the Last Great Warbirds Airshow.

Caz cites her photography as a way to express her love for Gary Numan. I have also seen pictures where Caz dresses up in full make-up and clothing resembling Numan’s Dance album cover in order to host live a show featuring Zara Band who play Numan’s music. In fact, here’s a video of her in action:

When asked if she has any other thoughts to share, Caz says wistfully, “May the God live forever, and I’d like to meet him once again.”

“Every Day I Die” by Gary Numan/Tubeway Army via YouTube user PatrickIngham21: