Strange Advance was another uniquely talented band to begin life in Vancouver, B.C. Canada. Recognized as Canada’s west coast hotbed of talent, Vancouver boasts a solid play list of musicians from the 80’s and beyond. Strange Advance is no exception.

One of Strange Advance’s identifying traits is the ethereal, otherworldly use of synthesizers to enhance their sound. My favorite track is “Worlds Away” from their 1983 album of the same name. It reminds me of the background music from the PBS series “Cosmos” starring the late Dr. Carl Sagan.

I have such fond memories of being mesmerized by the hourly show, and “Worlds Away” transports me straight back to that captivating, yet comforting time.

As with many of the bands I feature here, I only learned of this group in recent years after being bowled over by “Worlds Away.” The band is also known for a hit single “We Run,” a vocally emotive 80’s anthem song. In all, this was a solid band that had everything necessary to take the world by storm, but instead was relatively short-lived. The music world can be a completely mystifying and unfair environment. Strange Advance’s limited success underscores what a tough world it truly is. 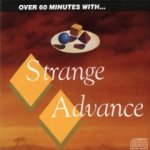