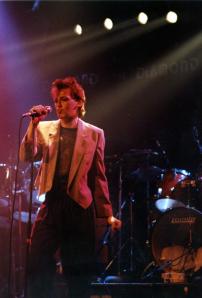 Not all of the music from the 80’s was great. For example, I have a personal revulsion for all things Madonna, Cher, and heavy (big hair) metal (with the exception of Cult). Sorry if this offends, but that’s just the way it is.

Within the realm of all that was extraordinary about 80’s New Wave and Post-punk music, are diamonds in the rough; gems that hovered beneath exteriors that were cast aside or overlooked in favor of the flavor of the moment. Particularly in the US, corporate suits met in stuffy, smoke-filled boardrooms and decided what we would listen to, when we would listen to it, and how it would be broadcast. Lucky for us that we had the nanny-suits watching out for our own oh-so-precious musical well-being – not. Who knows, we might have actually all grown up to be serial killers, or worse: individuals with top-notch and unique musical tastes.

And so, the legions of the clueless grew up, had families, and eventually discovered all of the riches that were hidden from the airwaves via a wonderful vehicle called the Internet. That’s the whole raison d’etre for this blog; it’s my way of sharing some of the best New Wave and Post-punk music that was deliberately swept under the rug, ignored, or just plain euthanized, all because some corporate bean-counters thought that was best for our tender ears and impressionable sensibilities.

Today’s entry features a fabulous band from Toronto called Vis-A-Vis. Most of the information is taken from the band’s MySpace page because precious little else is available on the Internet. From the Vis-A-Vis MySpace page: 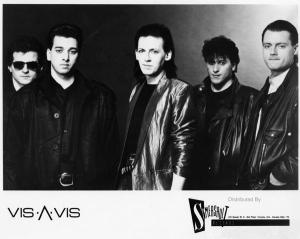 Vis-A-Vis is another prime example of a band of gifted musicians that had everything going for it, but ran up against impenetrable obstacles that caused its unfortunate, premature demise. They did, however, release three very vital singles: “Heart and Soul” and “I Am the Night (Colour Me Black)” from the Heart and Soul LP released in 1986, and “Shadowplay” from the Shadowplay LP released in 1987.

Rather than for me to paraphrase their history, it’s best to just visit the Vis-A-Vis MySpace page that Rude van Steenes has lovingly populated, listen to their music, and bask in the elements that made 80’s New Wave and Post-punk music so lush, unique, and vital. Meanwhile, watch this space for more criminally underrated 80’s artists and bands, kept alive in our hearts and minds, and brought to you via such renegade DJs as David Marsden and Ed-FM.

As far as I know, Vis-A-Vis music is no longer available for purchase. Please correct me if I am wrong. More reason to check it out over at the Vis-A-Vis MySpace page.