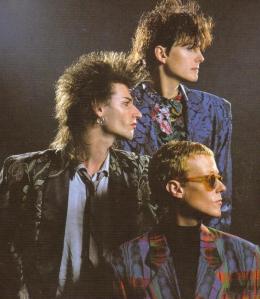 Maybe Love & Rockets doesn’t technically qualify for the “Criminally Underrated” series. They were, after all, a successful group in their own right starting in the early 80’s. In my mind though, because I have only grown to appreciate them 20-odd years after the fact, they certainly must have been underrated. After all, if I love them so much now, wouldn’t I had felt the same back then had they been given proper exposure?

The band formed in 1985 and was made up of former Bauhaus (think: Peter Murphy) members Daniel Ash (guitars, saxophone and vocals), David J (Bass and vocals), and Kevin Haskins (drums, synthesizers). Prior to Love & Rockets, Ash and Haskins had performed in a band called Tones on Tail. Remember the wicked bass-driven toe-tapper “Go!”? Fire-breathing hot.

Love & Rockets’ first hit was a cover of “Ball of Confusion,” originally recorded by the Temptations. Even though this was a Motown song, Love & Rockets were definitely of the post-punk (and at times, synth-driven New Wave) persuasion. Their notable album releases for the 80’s included Seventh Dream of Teenage Heaven which has my absolute favorite song by them called “Haunted When The Minutes Drag,” Express (includes “Ball of Confusion”), and Earth, Sun, Moon (includes “No New Tale To Tell”).

Most bands release a self-titled album as their first effort. Love & Rockets finally got around to releasing their eponymous collection in 1989, closing out a relatively successful decade for them. “So Alive,” which I (and others) have erroneously identified as a T. Rex composition, was a well-received  and high-charting hit from the Love & Rockets album.

The 90’s were not especially kind to the band as they grappled with losing their belongings in a fire and with a legal battle that ensued. They have since re-formed, performing iin both 2007 and 2008 at various live gatherings such as the Coachella and Lollapalooza extravaganzas.

I have been most fortunate to be reintroduced to the best of their music through David Marsden’s weekly show. You would do well to get reacqainted, too, if you have not listened to this band in a long time. They definitely had much to offer back then, and their music lives on today.

“Haunted When The Minutes Drag” via YouTube user nezror:

“All In my Mind” via YouTube user Mister Stereo: 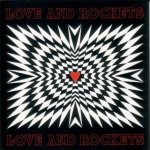